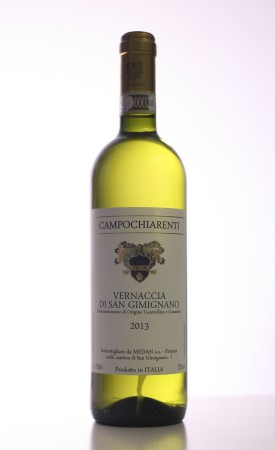 The DOCG (Denomination of Origin Controlled and Granted) was obtained in 1993 as a result of the quality reached after decades of continuous improving of all the producers.Origin Controlled) in 1966, showing how much was important this wine that historically has been already mentioned during the 13th century. Some of the greatest poets of the Italian Literature as Dante Alighieri and Boccaccio mention Vernaccia di San Gimignano in their poems: during the centuries Kings and Popes have been appreciated this wine that arrived in the 20th century as the most important white wine in a region of Italy famous for his great reds.

Grapes are picked up manually in the second half of September, and brought quickly in the cellar to be softly pressed, the must is fined then follows a slow fermentation at low temperature.Campochiarenti Vernaccia di San Gimignano is produced from vines 25-30 years old, with different clones that perfectly fit the soil of the vineyards. The age of the vines allows to obtain grapes concentrated and with high typicalness.

Vernaccia di San Gimignano is excellent during the first year because of the freshness and character, but is also able to age for some years enhancing the minerality and the body.  This a unique wine that is able to astonish anyone has not visited this historic corner of Tuscany.